Manx On The Money

Sable my wise immortal Manx cat has pushed for years for me to petition congress to have the Manx cat, specifically him replace our national symbol of the American bald eagle. He points out Manx are much more appealing then old baldy.

The image of the Manx cat can be found of the coinage of the Isle of Mann. Three coins bear the Manx cat image on the reverse side. There are special commemorative crown coins. The first two were issued in the 1970s. They were stand alone collector coins that came in copper-nickel  and silver proofs.

The third coin is part of a series of cat breed coins in which an hidden Manx is in the background in the coin. These coins are issued annually in gold and various sizes. The Manx was on official currency for the Isle of Mann , as the breed appeared on a penny issued between 1980 and 1983.

The Manx cat appears on a number of postage stamps for the Isle of Man. The latest is a series of collector stamps based on Victorian post card featuring Manx cats in 2011. Another notable collection featured Manx from around the world was issued in 1996. Other editions of collector stamps featuring the Manx have been issued over the years.

Sable would like to be on a coin. He stresses that the coins should be issued for tuna purposes only and well tune specifically for him. Sable is also all for Manx stamps that can be used to mail tuna , again specifically to him. 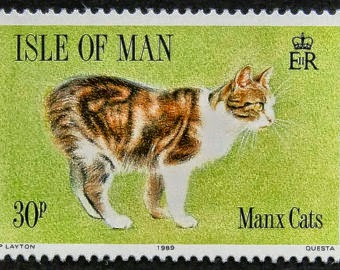 Posted by hoosierfemme at 8:44 AM