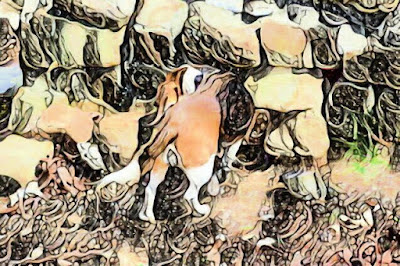 Octavius playing Hide and Seek with Chuckles the Chipmunk
Have you ever sat in the park and look around at the people moving? You see people in ones or twos or even a whole family smiling, talking, and laughing while enjoying the calmness of the park. Has it ever crossed your mind when you see two dissimilar people enjoying each other's company about how they met? How were they able to form the friendship and what binds them together? But The real story, in the end, was the impressive urban beagle who risked his life daily to protect his home from humans from the dark underbelly of the city.

The world is a beautiful place. It contains magic, one we cannot see with our eyes but exists around us. It could be that smile that a total stranger flashes at you when you're going through a bad day or even the little child that comes up to you to hold your hand in the grocery store when you stumble. Those little things which may not be significant to you are the magic that the universe blesses us with.

Webster woke up that morning a little grumpy. He had a lot of stress getting Luke to tell the story of a brave warhorse. Luke didn't budge and no matter the promises Webster made, the horse kept a long face and bent his ears backward in apparent malice. Webster was even more surprised when his owner packed him and a basket.

Webster enjoyed the drive. The highway was full of cars and a couple of vans with beautiful paintings. It hadn't taken Webster long before he brought out his camera and began capturing the imagery. He was slowly leaving the farm into a world full of cars and people and buildings that almost touched the sky. It was a trip that opened up his mind and broadened his horizon. It was the trip to the neighborhood called Logan Park.

Pictures after pictures clicked as Webster worked on his camera. He would go back home and show Harvard the pictures. If only Harvey the chihuahua photographer hadn't gone to see the barn cats. Now he's missed on the trip and will have to do with just pictures, Webster mused.

The neighborhood was a beautiful one. The people he thought he would see in twos appeared in tens with everyone having a destination as they walked about with focus. A click here and a click there before Webster returned the camera and settled down to a short nap.

Webster heard his human owner say. As his eyes flipped open, it fell on the camera. The last image was of a dog flying over an edge carried by an eagle. He had seen the image on the side of a van and had taken a shot of it. The door of the car flew open to show Webster a different world.

"Wow..." was all the cat managed as he hopped down from the car with his camera dangling from his neck? His waist pouch that contained his writing pad was bounded securely to him. The scenery was beautiful as wildflowers covered half-fourth of the yard. Webster didn't think it much for his flowers meant weed and weed needs to be uprooted.

Webster limped nimbly to the aside. Two dogs, a Siberian Husky and a Labrador Retriever chased themselves. Webster continued walking taking in all the amazing details while shooting pictures of dogs, different breeds playing together and of cats cooling off under shades.

The voice prompted Webster to turn to his side. He just couldn't readily place the voice, so it heightened his curiosity. He waited to see which of the animals roaming around had such a sonorous voice. He didn't have to wait long before a beagle burst out through the thicket at the end of the park.

"Oh... Well, he sure has a lovely voice."Webster said as he took one shot of the newcomer and turned to be on his way.

"Wait for me! You keep deceiving me with your endless supply of crackers. I should have won this particular race."

The voice stopped Webster in his tracks. He turned around and sure enough, the voice wasn't from the beagle, it was from someone rather surprising; a chipmunk. Hold up, Webster said to himself as he watched with keen interest. The chipmunk walked up to the beagle and dropped crackers in front of him.

"Next time you're coming on a race, can you leave these snacks behind at the house? Gave me a hard time concentrating."

"Okay Chuckles, I will do just that. Put it in the record though, I outran you three times already." The beagles retorted as he wagged his tail.

"Oh yeah? I want to see you pry the thickest thickets with me." Chuckles the chipmunk said as he dashed off.

The beagle stood wagging his tail and counting up to ten when Webster interrupted him. 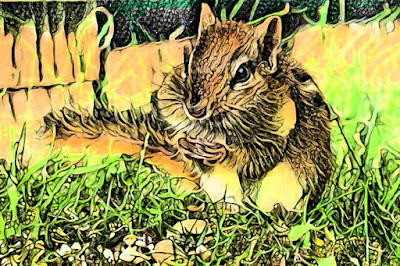 "That's... Well, I lack the words for it. My name is Webster. I own the blog is The Catnip Note. I am a blogger and I put up interesting stories plus photographs of animals that have distinguished themselves." Webster quickly introduced himself.

"I'm Octavius Came to the park with my owner. She's over there with the others. I'm having a little bit of fun with my best friend Chuckles."Octavius said as he stretched his paw.

Webster raised his camera and took three more shots of Octavius. He was about to move on when it occurred to him. The picture of a beagle and a chipmunk running side by side isn't one you see every day. There must have been a story. He paused in his strides and faced Octavius. Webster 's owner meets up with her friend in a place called Logan Square Dog park.

Webster was beginning to think that Chicago was not much different from the area he was from just more organized. The dogs did not play in open fields with weeds that he had heard here was known as urban landscaping and natural greenspace. Here they played in an organized space called a dog park. It was near a place near Buck Town. Webster knew all the does and bucks in his neck of the woods well lived in the woods. Here the deer Webster surmised lived in houses in a town of their own. Webster wished he could see that, but he was here to interview an Urban beagle about his quest for a friend.


Still, the male humans were odd here. They looked like lumberjacks but carried no axes. Instead many carried small paper bags that contained something called beard oil from a shop called The Beard Brothers Organic Locally Sourced Bread Oil. It was odd because those without a knit cap had things called "man buns" on their head. 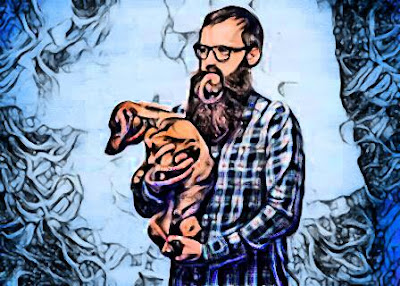 While Webster was wandering around the park, he noticed the humans here discussed farming and composting. Webster was a little confused when he heard an urban farmer with a small Yorkie dog wearing a 'grateful dead" tee-shirt call eating cheese murder. Mostly these folks walked around with headphones that Octavious told Webster were called Walkman.


" Who are these strange lumberjack farmers? Webster exclaimed.

"They are called hipsters and they are everywhere. Part of my job as a brave smoothed brained urban hound dog is to keep those dangerous humans from entering my yard. My humans give me extra treats every time I chase them off from lingering in front of our house."  the brave beagle said wearily.

"The boys in the house say they are very annoying. I not sure what annoying hipsters do but I am sure it is horrible. I have heard they have 'gentrified" some neighborhoods. Well, as long as I am on the job, there will be none of that foolishness on my street."  Octavius spoke the truth as all seasoned warriors do.

Webster was truly impressed by the bravery against the Hipsters who murdered by forcing others to eat cheese.

"I should apologize to you. I didn't plan this but here we are. How did you become friends with Chuckles the chipmunk? "Webster asked slowly.

"Oh, Chuckles? I found him one day and brought him home."

"Your story... That's where it started."Webster asked as he looked at the words he had written on his pad. It was a tad too short.

"Oh no, it didn't start there. There's a badge of bravery affixed to my chest by my owner. She says I am a brave smooth brained dog. I would seat in the front porch and bark at other people, you know, strangers that aren't in a hurry to leave the front of the house. I protected the house this way and didn't let strangers in."

Octavius started his story. It was the same moment Chuckles returned wearing a grumpy look on his face. Webster only smiled. He had put a pause to their game and fun.

"There's this strange evil device inside the house. Oh, how much I hate it. I kept visitors away from it because when they sit on it, it rocks and shakes them so hard. They call it a recliner. Phew! I did my best and earned my rewards. But you see, I was one lonely dog. When there is no one passing in front of the house or any guest visiting, I was always on my own."  Octavius looked sober as he narrated this part.

"Why?" Webster found himself asking.

"My owner wasn't always around. She has to work you know and her sons, all grown up leave the house all the time so it's mostly quiet. I would try to play a game with myself but then, there was no way I could play fetch alone. So I went out in search of a friend."

"A friend that will always be there." Chuckles chipped in. He was already enjoying the story.

"Yeah, a friend that will always be there. I saw them but they weren't ready. The first person I met was Rondell the rat who lives under the front stoop. He said he was going to be my friend and boy was I glad. But something happened as he went through a catalog given to him from some Rats Union he belonged to in the city. Unfortunately, beagles weren't on the list of those he could associate with." Octavius continued.

"Now that's ridiculous!" Webster said with a look of wonderment on his face 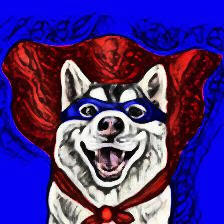 The superhero Pawnshop Huskie
" Then there was Conrad the raccoon that raided the garbage. He said I have to follow her every day for garbage hunting. Parnell the possum which roams the community garden in the church wanted me to babysit her litters. And oh, Haughty Huskie said he was too busy advertising superhero prices on a red cape strapped around him for the pawnshop to spare a minute to be my friend."  Octavius sounded sad.

"And then he found me one day under a wildflower hiding from the rain. He brought me home and hid me in the bookcase close to the fireplace to keep me warm. He went on to get or more of sneaking grapes and gluten-free crackers from the kitchen to me because I was hungry. We became the best of friends after that. Now we run, play, and go in search of wildflowers whenever everyone leaves the house. That my friend is friendship." Chuckles the chipmunk completed the story.

Webster was at loss for what to say. He just held onto his camera and took shot after shot of the beagle and his best friend, the chipmunk.