Sometimes things happen to show us how easy it is for us to misjudge something. It will teach us a lesson to look before we leap. Some of these lessons are beautiful memories that we hold onto because they made us discover the joy in nature and in being at par with its many wonderful surprises. Harvey didn't know any of these. His routine on the farm since Webster traveled each day was to wake up, arm himself with a camera and go outside to take pictures. There are days he would just sit all by himself and begin to paint beautiful pictures in his head.

Harvey jumped out of the momentary reverie he had entered. He was sitting under the shade of the barn with his camera when he heard Luke's voice.

"Common, you don't start up a story and leave it halfway. I need to hear the rest of it." Luke protested.

Harvey smiled. The little chihuahua apart from daydreaming has been a little bit worried about his next story. He wanted to write something different, something magical that will bring out the pictures he has in his head. His two ears stood at its end as he wagged his tail slightly. One thing is being a blogger's assistant, another is listening to stories as it keeps his imagination sparking with pictures to match the words.

"Well, the rabbit didn't know where he kept the egg. The egg that had taken him a lot of magic to create. He went from the Northpole to the Southpole looking for it. He didn't know if the terrible minions had taken it or not."
Diesel paused dramatically.

"Oh, you're here to Harvey. How is the blog going? Did you come for an interview?" Luke asked twisting his snort.

"No I did not. I was listening to a story. If you don't mind Luke, can we allow Tugboat finish the story?"

Harvey said tapping his right paw impatiently on the ground.

"Byron the Easter Bunny didn't find the egg. Nobody knew where it was but legend has it that a prophecy had gone forth. The egg would be found someday in a manger surrounded by straw. Its golden shell shall reflect the light into the eyes of the chosen one who finds it."

Harvey smiled deeply as his mind drifted from the story. What if this was no ordinary story and the egg actually existed? The thought ran amok in his head.

"The egg exists and it will be found soon. Where and when is what the prophecy didn't say. It may be tonight, it could be tomorrow but whoever finds the egg should keep the egg because there's magic in it."

Harvey didn't know when he let out a bark in excitement. He could see the full picture already; he, Harvey, tending to the egg with all of its magic inside.

The voice was crystal clear. It was Webster's voice in his head.

"Phew... The end..." Webster clicked the send button. He looked at the picture of Luke again on the computer. There, standing all majestic with his mane flowing in the wind is the horse with a magnificent smile.

A flash of lightning and a clap of thunder sent the whole farmhouse into darkness. Webster thought he heard a noise coming from the barn. He sighed as he stood up and made his way towards the barn. As he entered into the barn, another flash of lightning dashed across the sky. From the corner of his eyes, the light caught him. Harvey turned around to see it as it was in the prophecy. An egg, big and golden sitting alone in a manger with straws around it.

"The Easter Egg!" Harvey had to prevent himself from barking in excitement. He looked at the egg and all the memories and pictures Diesel's words painted in the story came back to him. He walked slowly to the egg until his nose nudged it.

"Wow... The egg is mine to keep with all of the magic in it." Harvey said to himself. He touched the egg with his left paw. A cracking sound filled the barn.

"Oh no..." Harvey whispered but it was too late. His left paw was right in the face of a golden duckling.

"Mama... Maama!" The little duckling quacked as it shook the remaining pieces of shell from its body. 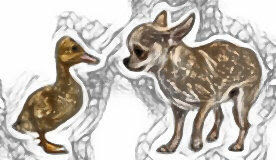 The duckling moved to the edge of the manger. Harvey had no choice. The duckling had imprinted on him and there was no way he could shake it off. So off he went with the golden duckling back to the farmhouse. Since Webster wasn't around, the duckling will share the cot with Harvey.

The following morning saw Harvey and his camera taking shots of the duckling as he moved around creating memories. The other animals knew what happened Diesel had a mischievous look in her eyes while Luke had his mouth opened in awe. The Easter Bunny is real and has given the magic of looking over a young one from a different family to Harvey.

"Do all your Easter stories come to pass?" Luke asked  Diesel in a loud whisper but Diesel only laughed.

It was the afternoon of that day that Gloria the duck came running to Harvey. The other farm animals had told her of him and his strange Easter present. Duck and duckling were reunited while Harvey learned a lifelong lesson.

Magic is everywhere, even in the most exaggerated stories. They make our hearts open to wanting to accept others thereby sparking our magic tale.

Posted by hoosierfemme at 12:36 PM